It’s been over a months that I’ve had 2 blissful weeks in Taiwan! I had an amazing time, ate some great food, enjoyed beautiful scenery and got to squeeze in some shopping! I’ll be starting a series of my 12 full days over there and maybe an extra post on how I prepared my trip and the stuff I took with me on the plane.

After a 12 hour long flight we finally arrived to Taoyuan, where we took a train (TRA) to Taipei Main Station. From there we took the metro to Fuzhong station, close to our hotel, which we didn’t immediately find. But luckily we got some help from a very friendly, good looking might I add, Taiwanese guy :D. By the time I unpacked, took a shower and put on something decent, it was already dark outside. And you know what, as a first meal in Asia, you can never go wrong with some Korean BBQ!! There was this cute restaurant near the hotel, I had spotted earlier on. I had a set that came with marinated chicken, teokbokki (my first time ever having these delicious Korean spicy rice cakes. I didn’t expect it to be cold though…), veggies and mah bowl of rice!! We also ordered a seafood pancake, sooo goooood! We had our meal with some Cass beer. I’m normally not a beer drinker, but because it’s so low in alcohol, I actually thought it tasted refreshing and went well with the food! 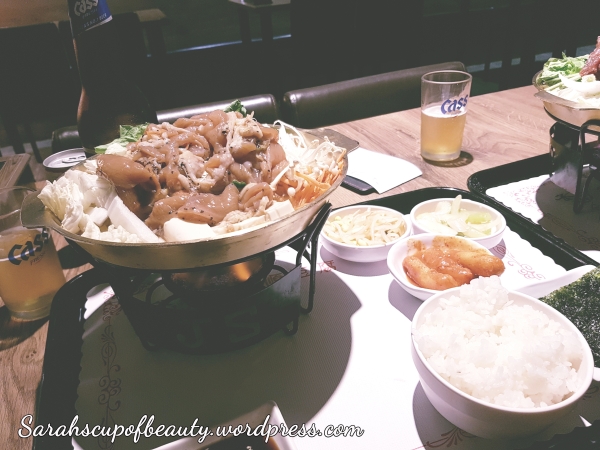 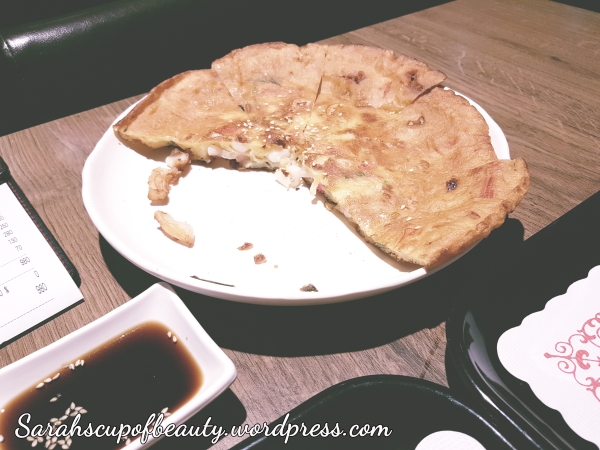 I started off my first full day in Taipei with a visit to Longshan Temple. It’s crazy how fast, easy and clean the metro stations are. So from Fuzhon station, we went to Longshan temple station, which was only 5 stops further. What specifically caught my eye, was the random cute things we saw everywhere. See the picture below, which was on the door of the toilets… Like, SERIOUSLY, so cute!!! 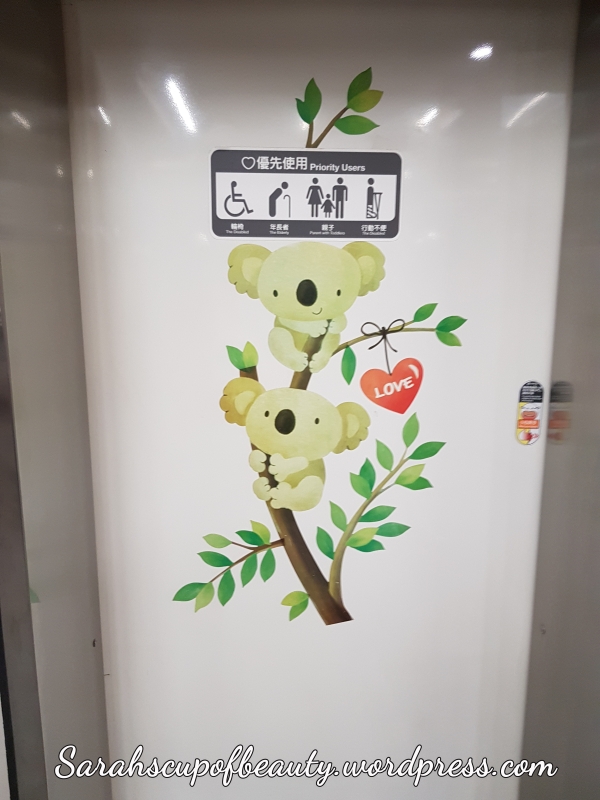 The temple was a minute walk from the station and looked really beautiful. Especially the statues on both of the ends of the temple. There is a waterfall and on the other side, there’s a dragon statue. Somehow, I filmed the dragon statue, but forgot to make pictures… 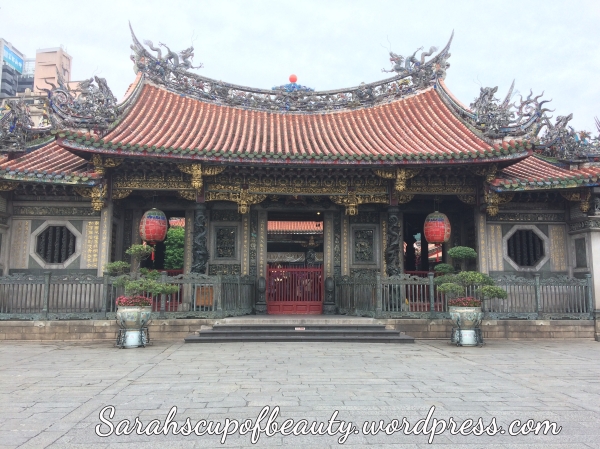 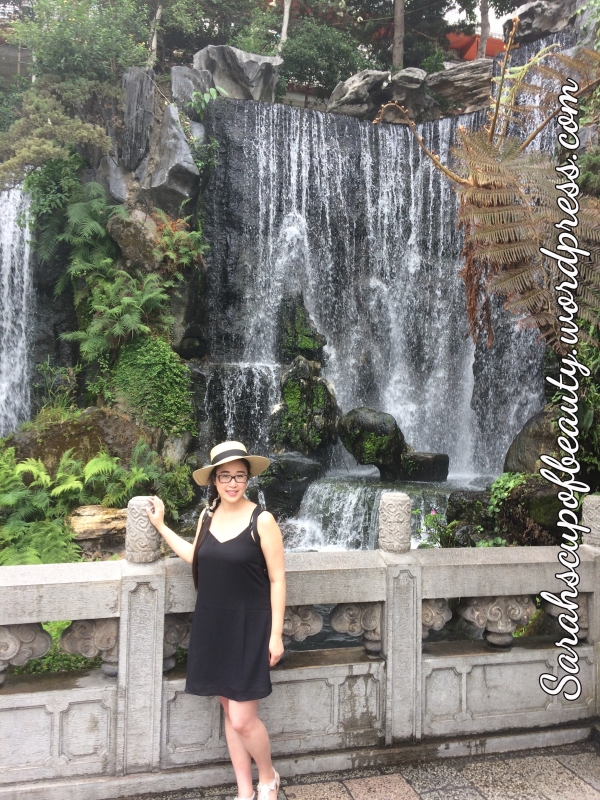 I wanted to be fancy with my little hat, but it didn’t take long for me to take it off haha!!! It was so frikkin’ warm and uncomfortable. Now I remember why I’m not a hat person. But I at least I got to take some cute pictures with it muhahaha! 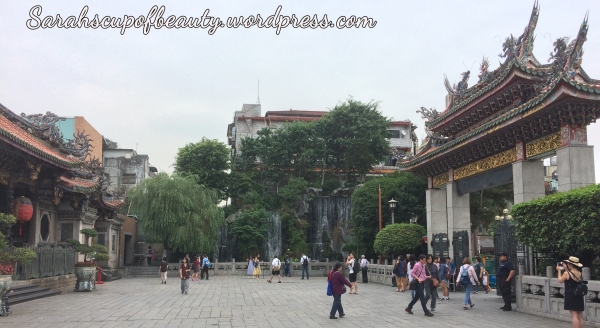 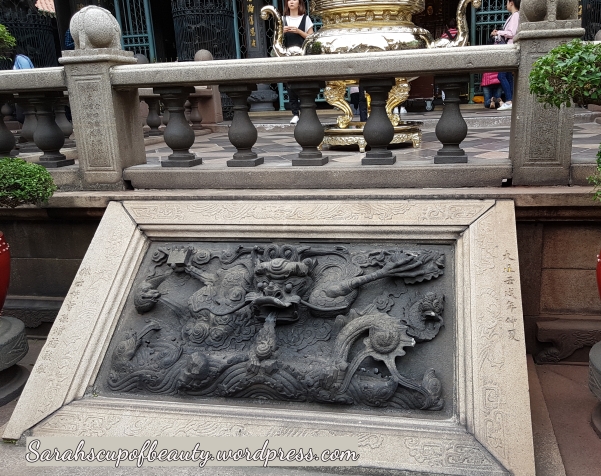 I’m not sure what the religion was, but there were many people praying and throwing red wooden half moons and long sticks. There were huge tables decorated with beautiful orchid flowers and food and fruit offerings. 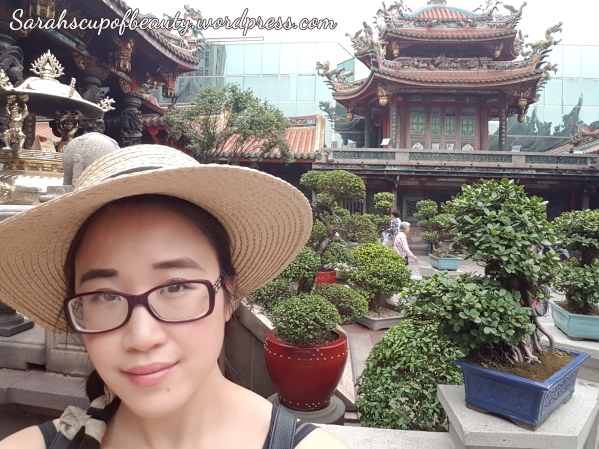 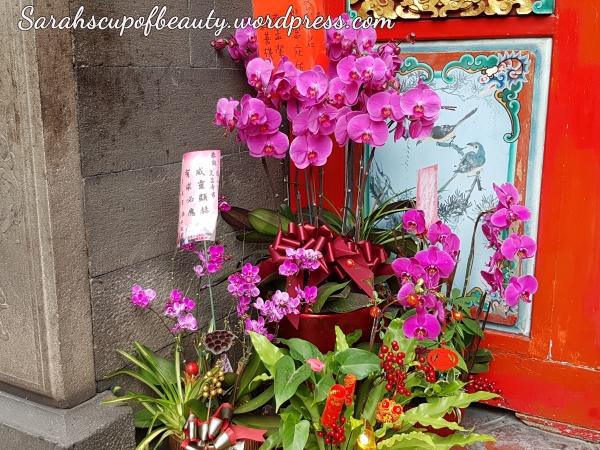 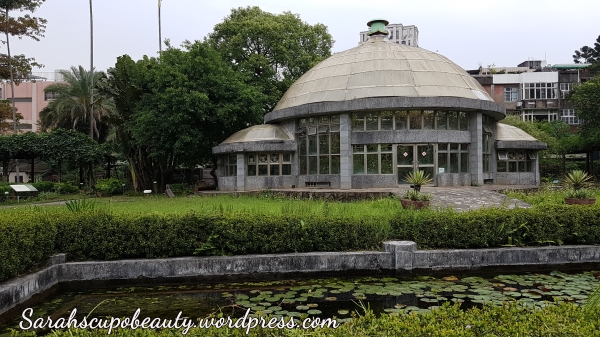 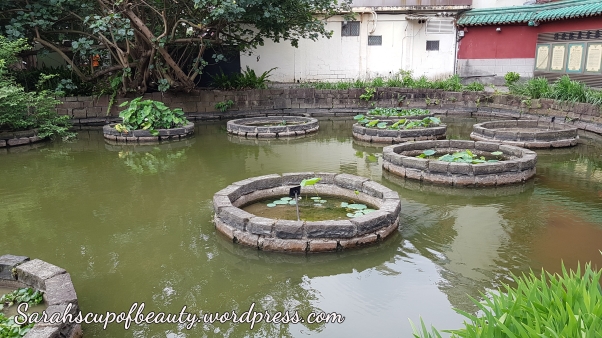 From there, it was another 20 min walk to the Chiang Kai Shek memorial. During this walk, you could see the greens and well tended plants on the streets! I love how clean everything was! 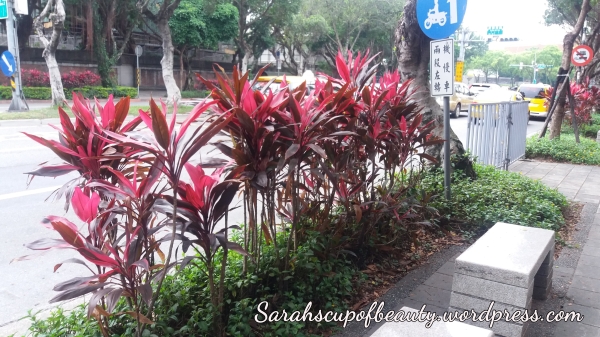 Up to this point this was our itinerary (the pink lines):

So by the time we arrived at the memorial, we were quite hungry. I thought that there would be a lot of restaurants near the memorial hall, but I didn’t see any restaurants. As I did prepare my trip well, I knew there was a famous restaurant called Jin Feng, where they serve amongst many other dishes Lu Rou Fan, braised pork belly. But the waiting line was soooooo long, I probably wouldn’t have survived that… Luckily it wasn’t a long walk from a little shopping mall, where there was a local food court. There had this little menu with Lu Rou Fan, tofu, soup, cabbage and rice for only 100NT$ (2.77€). It was really good!! 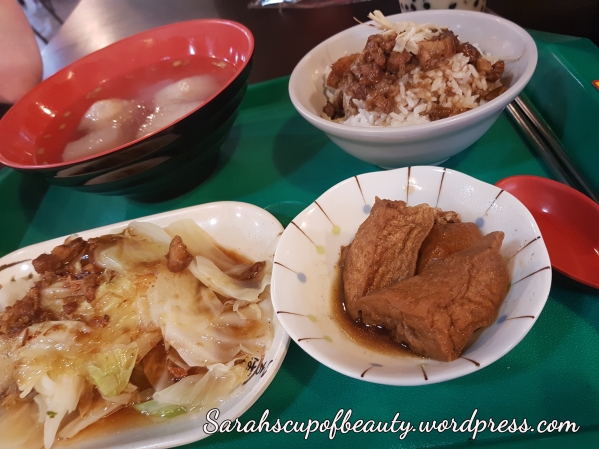 After lunch, I was fully energized to continue the sightseeing! I was really impressed at how big and grand this memorial was. It consisted of 3 buildings and several gates. It was beautiful! 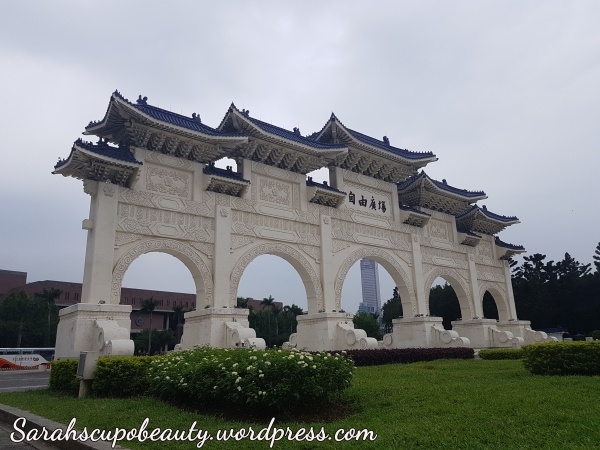 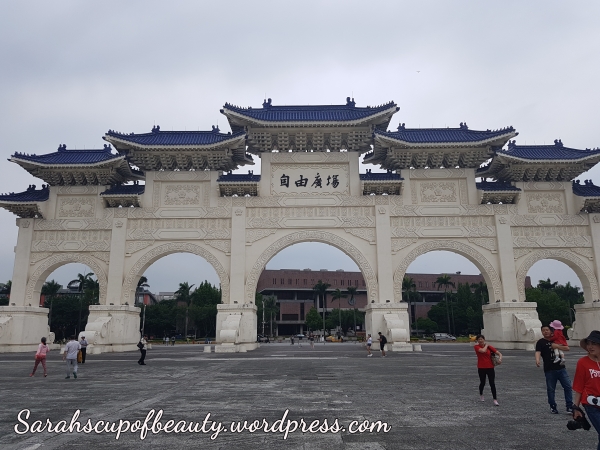 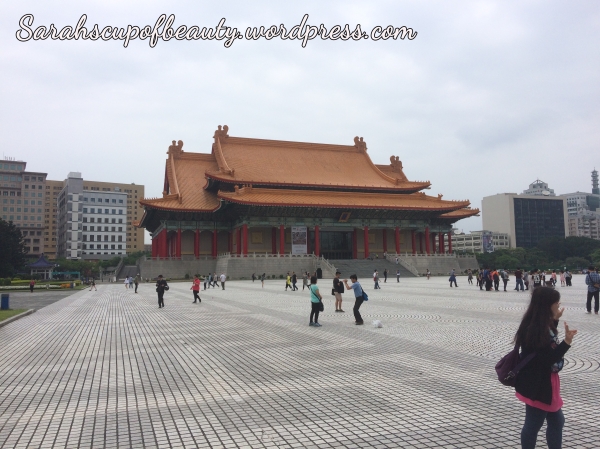 As you can see, it was very cloudy that day, but it was warm nonetheless. I also heard that if it would’ve been sunny, that the light reflects on the little tiles, making it very uncomfortable for the eyes. 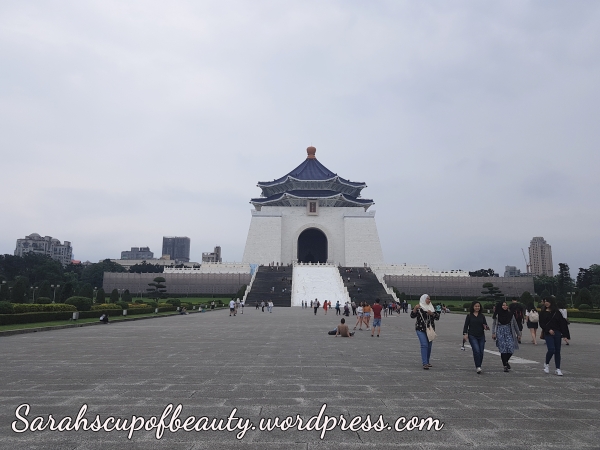 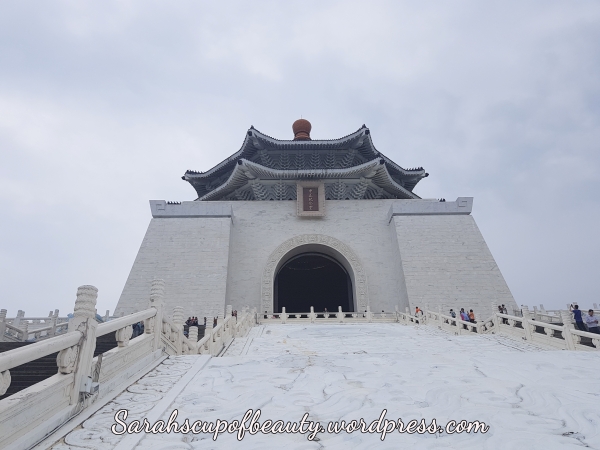 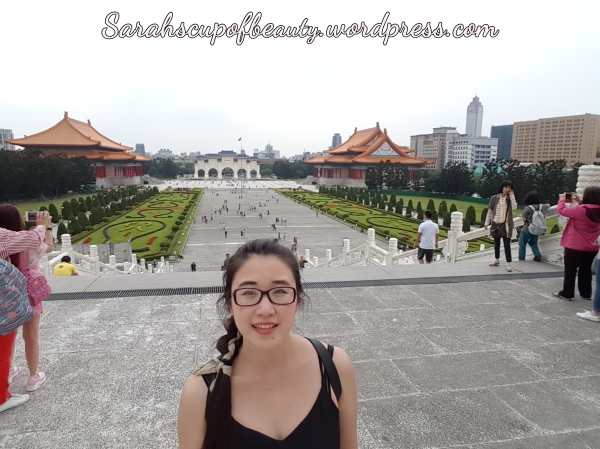 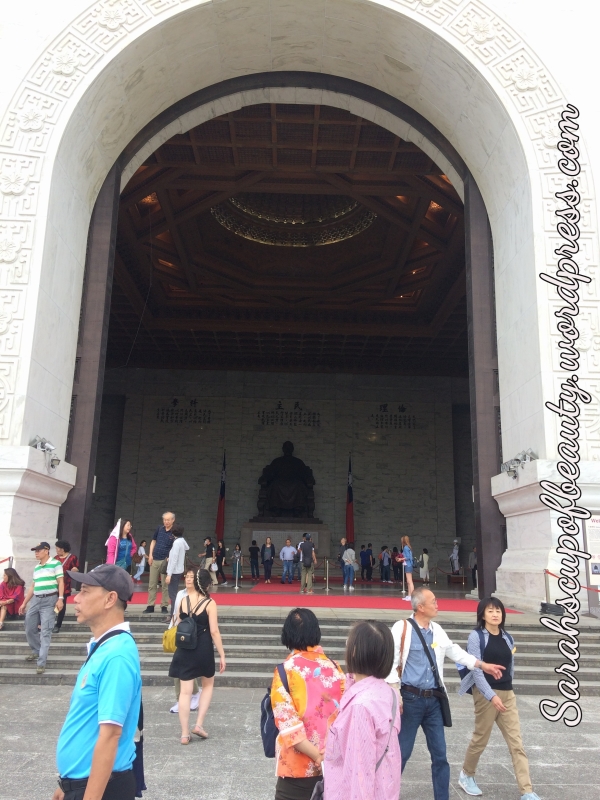 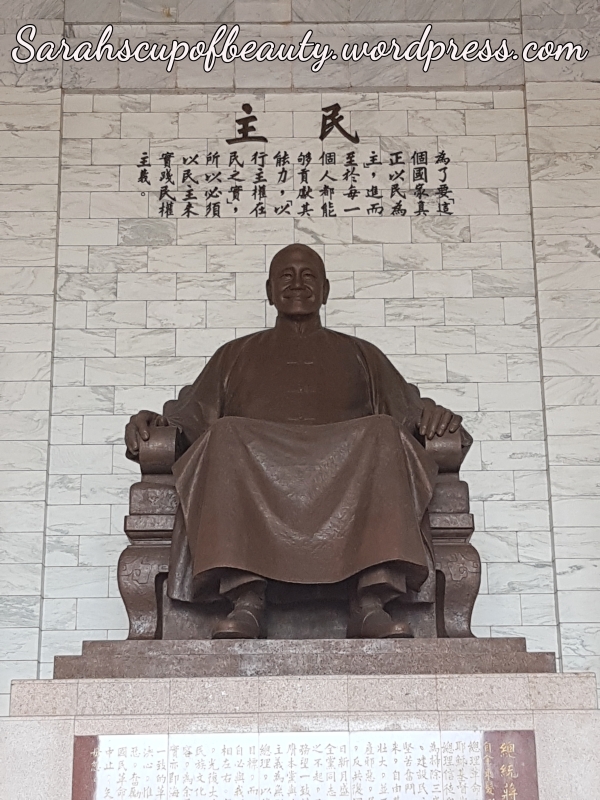 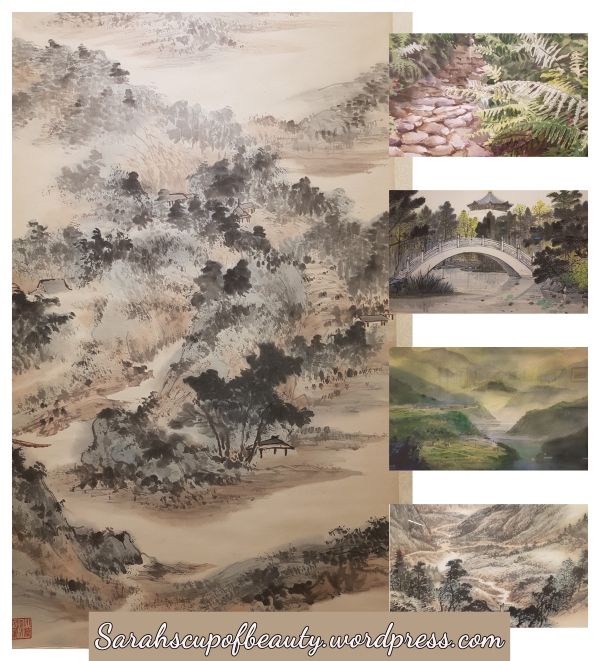 Next stop was Taipei 101. As my feet were hurting, we decided to take the metro. As we arrived, it was still bright. And we thought that going to the top of the building would be nicer when it’s dark, so we went to Att4Fun, which is a shopping mall just across the street. I knew that there was a shop for glasses there, that I wanted to visit. It’s called OWN DAYS and I got 2 pairs of glasses for only 100€ in total, which is a bargain! When you order glasses in Belgium, it takes at least a week for you to be able to collect the glasses. But here, it was done in 20 minutes!!! What a service! So while, they were getting my glasses ready, we were walking around in the mall. I spotted a stand from L’Herboflore, a Taiwanese skincare brand, specializing in sheet masks. 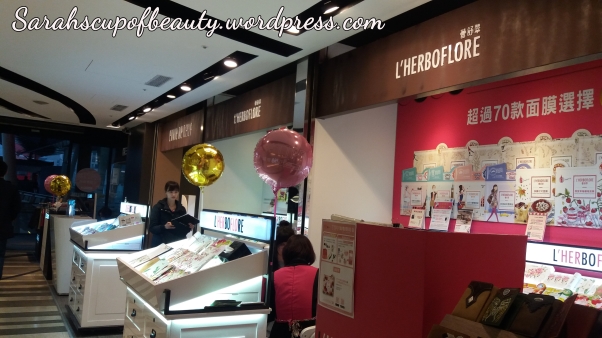 One of the sales ladies put a sample on my hand, which was a mini sheet mask. Hahaha, that was so cute! You could immediately tell that the serum was very soothing and that the sheet mask was all drenched in it. 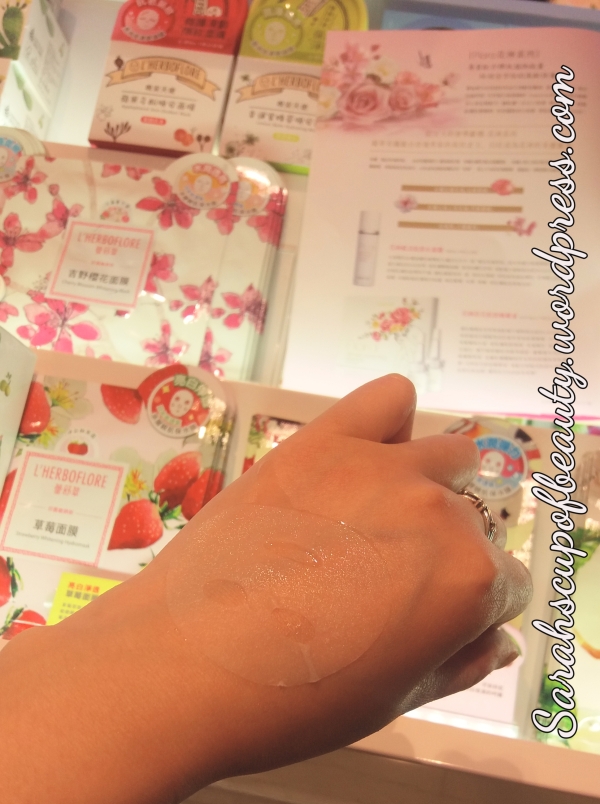 I ended up buying a couple of masks to try out. I didn’t buy many though, because I had a whole wishlist that was vewwwwy long :p. After we collected my glasses, it was dark outside. So it was time to go to the top of the Taipei 101 tower, which as the name says it, has 101 flours. 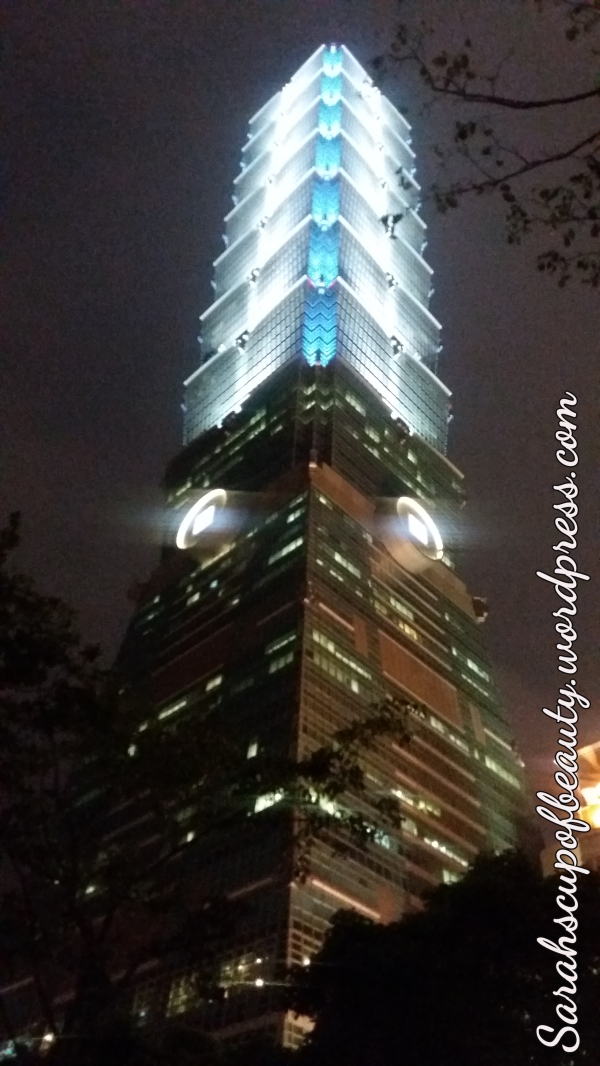 On the 5th flour, we could purchase a ticket to take the elevator to the 89th flour. That was 600NT$/person (which is about 16.6€…). I thought that was expensive. The waiting line was also quite long. But taking the elevator was really nice!!! It didn’t even take a minute to arrive at the 89th flour! While standing in the elevator, the lights are dimmed, there’s a bit of calming music on the background and when you look up to the ceiling, there’s a little light show that looks like stars. The view from the 89th flour was magnificent. But I have to say, I was expecting there would be a little coffeeshop or something to have a little tea with some dessert, but that wasn’t the case. So I was a bit disappointed. From the 89th flour, you could take the stairs to go higher and go outside so see the beauty of the city at night. 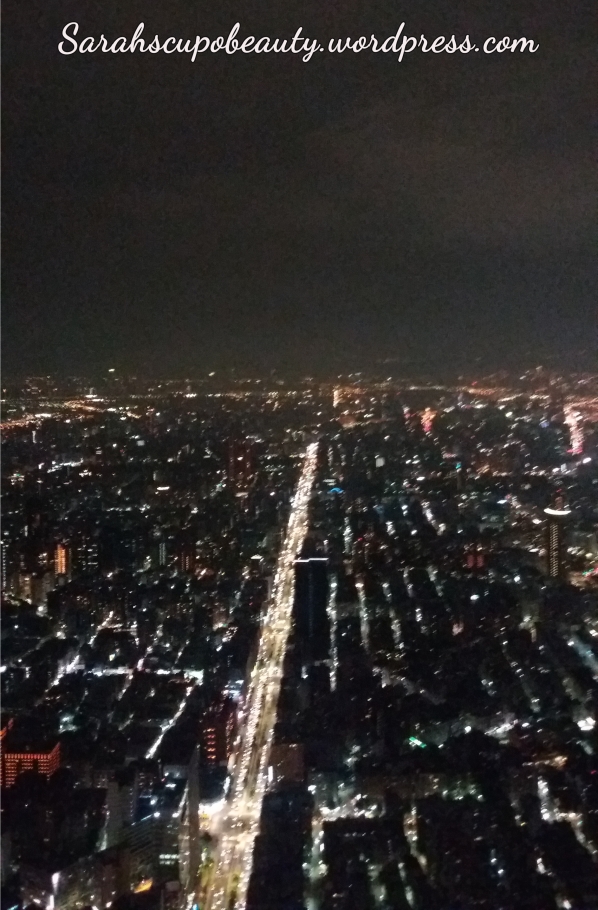 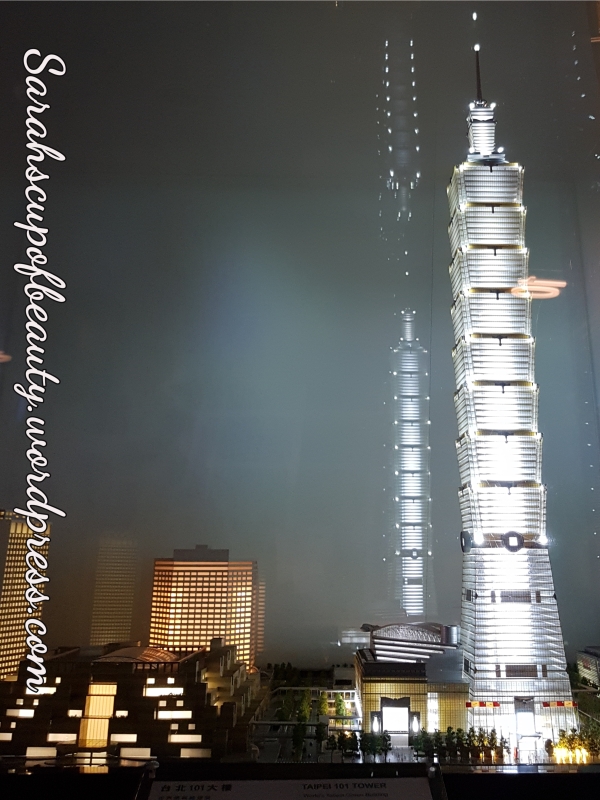 Right next to the Taipei 101 was it’s luxurious shopping mall. We decided to go there to have dinner. I never say no to a good hot plate full of yumminess!! 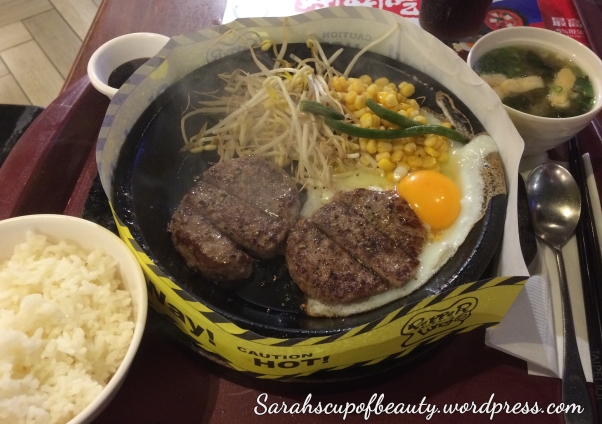 So friends, this wraps up my post on my first day in Taipei!! In case you were wondering, here are the metro stops of the day. We obviously walked from the temple to the memorial hall, but you can easily take the metro. 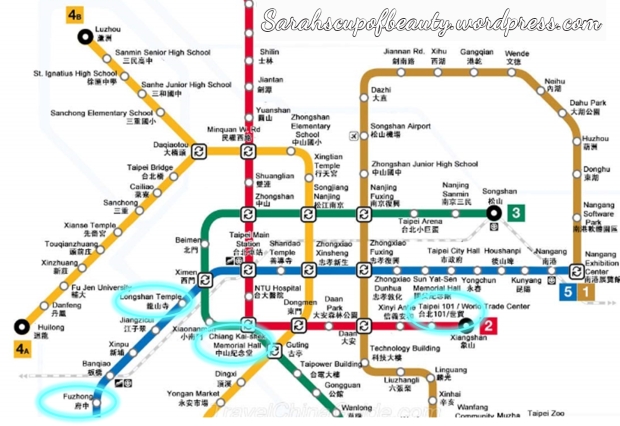 I hope you enjoyed it! Stay tuned for more posts on my travels!!

One thought on “Cup of Life: Travel Taiwan – Day 1”