Nothing makes me happier than to be allowed to do a Make Over! I love analyzing someone’s face, skin tone, texture,… and create a look that would not only look good on them, but would also soot their taste.

The beautiful lady, I’ll do a make over for today is called Cris. She is a bubbly 40 something, that could run 10 km at 11 km/h (O_o I’m in awe honestly, running is definitely not my specialty). Being a completely devoted mother of 2 boys and sport fanatic, she is someone that doesn’t have a lot of time to spare to do her make up. So in other words, it has to be fast, natural, long wearing and enhancing her beautiful features. 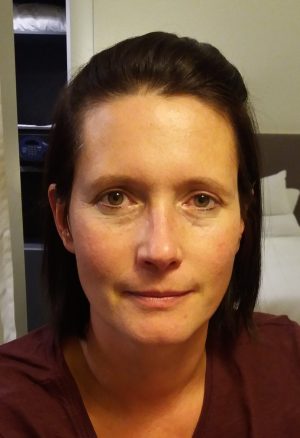 Cris before the Make Over

Cris has dry skin with oily T-zone. The skin tone is pretty even, though there was a bit of redness on the cheeks. With her dark hair and warm skin tone with a slightly yellowy undertone, I think she’d look great with golds, browns and olives. To even out the skin, we applied her foundation (from Vichy), which was her perfect shade. To conceal her eyes, I mixed her foundation with my very light HD concealer (from Catrice). Everything was blended out with the beauty blender.

The shape of her face is a bit square and elongated, I guess a bit like Heidi Klum. So I very softly contoured on the sides of her forehead, from her ear towards her mouth and the jaw line (using the C9 Morphe Brushes contouring pallet).

For the cheeks, I chose a soft ginger colored blush (Hush from the Urban Decay Gwen Stefani Blush Pallet), that looks natural, but does give her a bit of glow and color. I then applied as highlighter Equinox (from the SleekMakeUp Solstice pallet) on her cheek bones, on the bridge and tip of the nose.

Her eyebrows are present but quite light. I applied an ash brown shadow on the front an a bit of a darker brown shadow on the tail of the brows and elongated it, so that the face was a bit more in balance. I thought, this really made a huge difference.

I kept the eyes super simple, because they are already defined and deep set. For the shadows, I only used the All About Bronze eyeshadow pallet (from Essence cosmetics). I went for a wash of light bronze over the lid, with a shimmery cream on the inner corners to open up the eyes and a matt cream shadow on her brow bone. With a darker brown shadow, I lined her eyes with an angled brush. It seems to me, that this will be a lot faster for her than to fuss with a pencil or gel liner.

The most scary part honestly, was curling the lashes. Even though it wasn’t easy, it was worth it. It opened the eyes incredibly and gave her an open look. Topped off with mascara, her eyes looked lovely.

To finish it off, I applied a colored lip plumper from Catrice (Volumizing Lip Booster) on her lips.

Cris after Make Over Day Look

I still kept it simple for the Night Look, because Cris does like to keep it natural. I wanted to create an easy but classy look for her. The eyes were darkened with a deeper bronzy brown shade. I then lined her eyes with black gel liner (Cozz Cosmetics) and applied an extra coat of mascara. The cheeks were vamped up with Mauve Me blush (Ombre Blush from NYX).

I always end with the lips, which I decided to line with the Satin Mauve lip liner (from Essence Cosmetics). And then I topped if off with the Vivid Matte Liquid in Possessed Plum (from Maybelline). 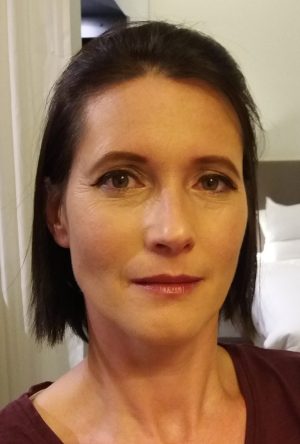 Here are the before and after pictures (no make up, Day Look, Night Look).

I hope you guys enjoyed this little make over. Special thanks to Cris, who allowed me to play around with make up on her. She’s great to work with. I really had a great time!! She really looked sophisticated.

3 thoughts on “Cup of Looks: Day to Night Make-Over”